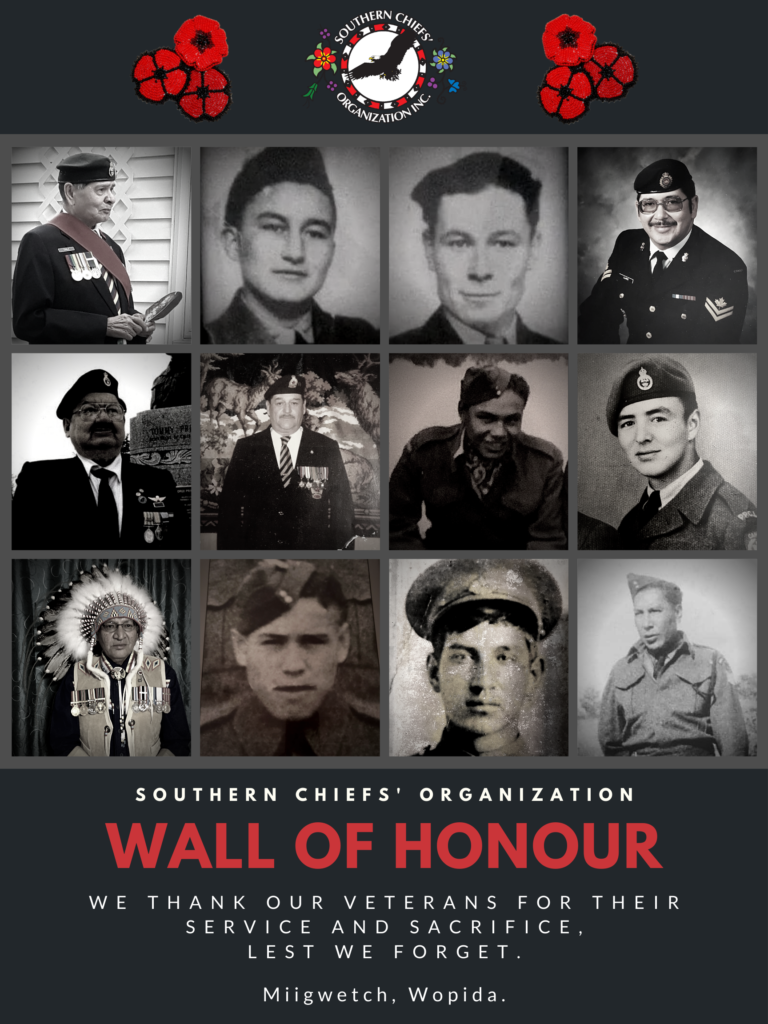 Southern Chiefs’ Organization recognizes First Nation Veterans from southern Manitoba for their valiant bravery, sacrifice, and achievements. To honour them, SCO has created a “Wall of Honour”, featuring Veterans from our 34 Anishinaabe and Dakota First Nations.

We thank these courageous and hard-working individuals for their service,

Have a name/photo you would like to submit? Email it to media@scoinc.mb.ca! 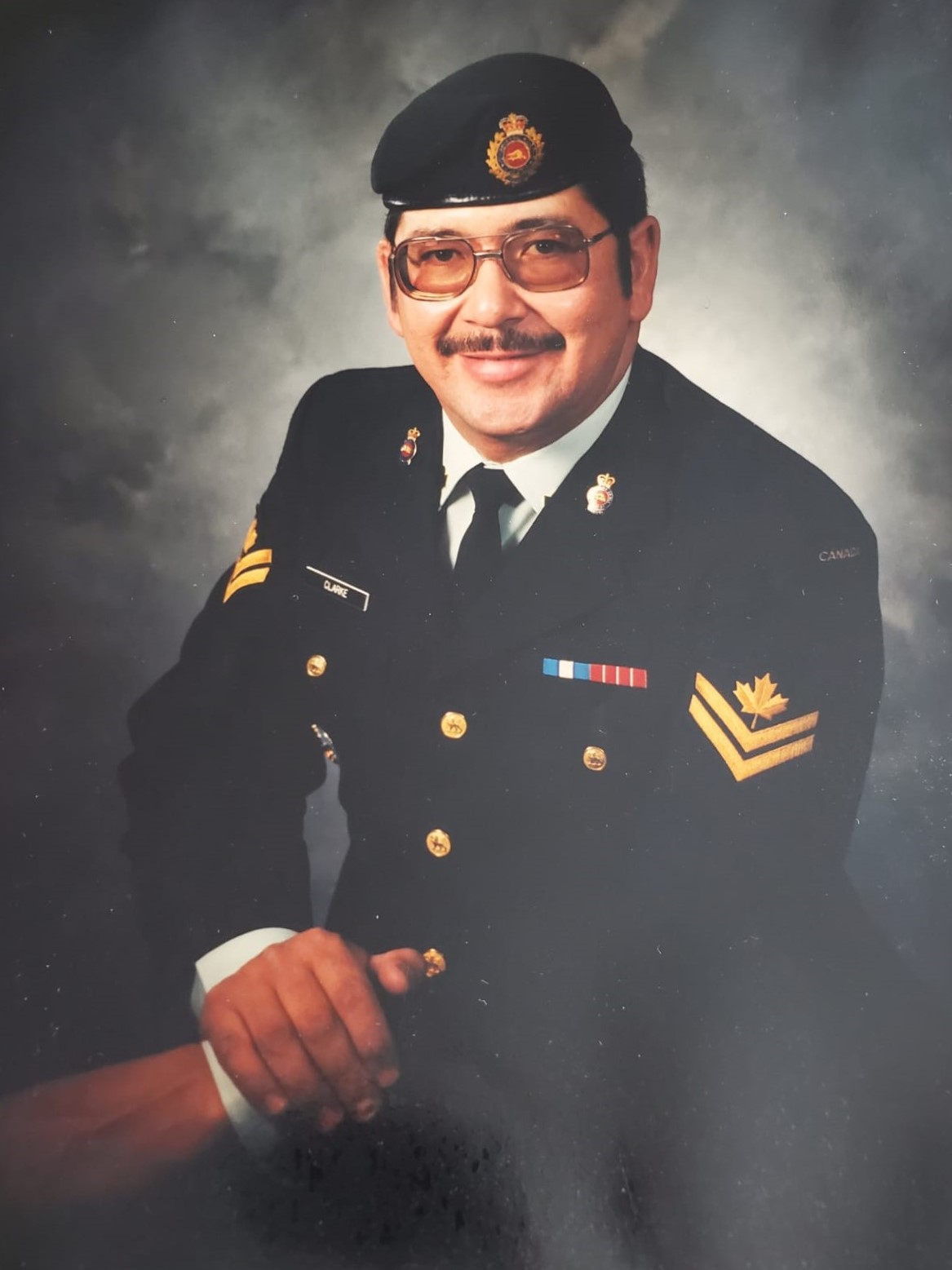 Mervin Clarke of Hollow Water First Nation joined the Canadian Armed Forces in 1970 and served on peace-keeping missions in Cyprus with the Princess Patricia’s Canadian Light Infantry. He would be stationed in Germany and across Canada before retiring in 1993.

Mervin continued to serve Indigenous communities by working for the Federal Government at Indigenous and Northern Affairs Canada (now Indigneous Services Canada), bringing his total years of service to 50 years!

A proud father, Mervin loves to hunt and golf in his spare time.

We thank Mervin for his service. 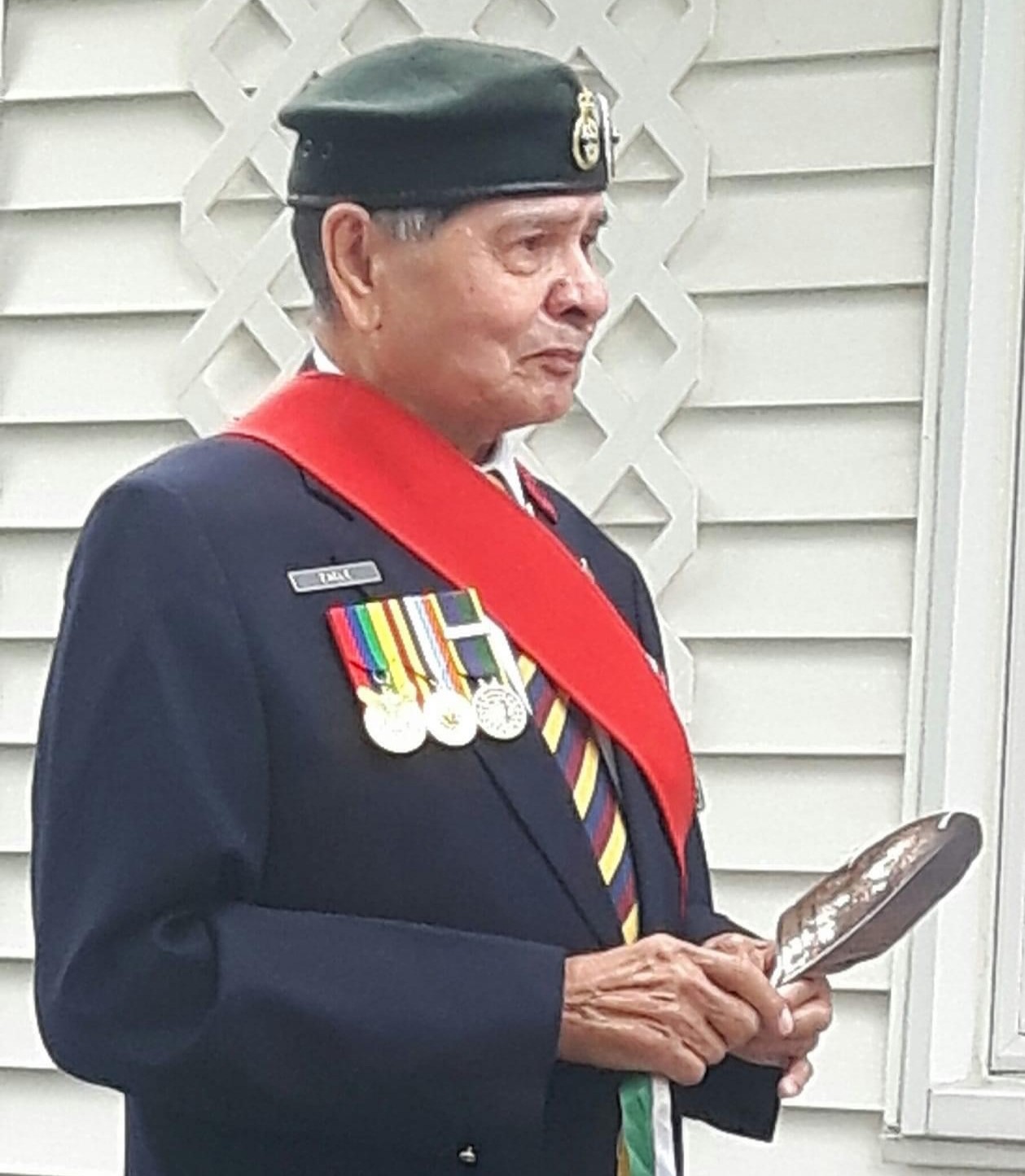 James served for 25 years in the Canadian Armed Forces from 1953-1978, including three peacekeeping tours with NATO in Cyprus and Germany, and he received several medals.

A respected Elder, Mr. Eagle has spent years working predominately for Aboriginal organizations and has been active in rights and justice related to Aboriginal issues. He was involved with the National Aboriginal Veterans and was an instrumental figure in getting the Aboriginal War Memorial completed in Ottawa’s Confederation Park on June 21, 2001.

James has been happily married for 64 years and resides in Ottawa, Ontario.

We thank James for a lifetime of outstanding achievements. 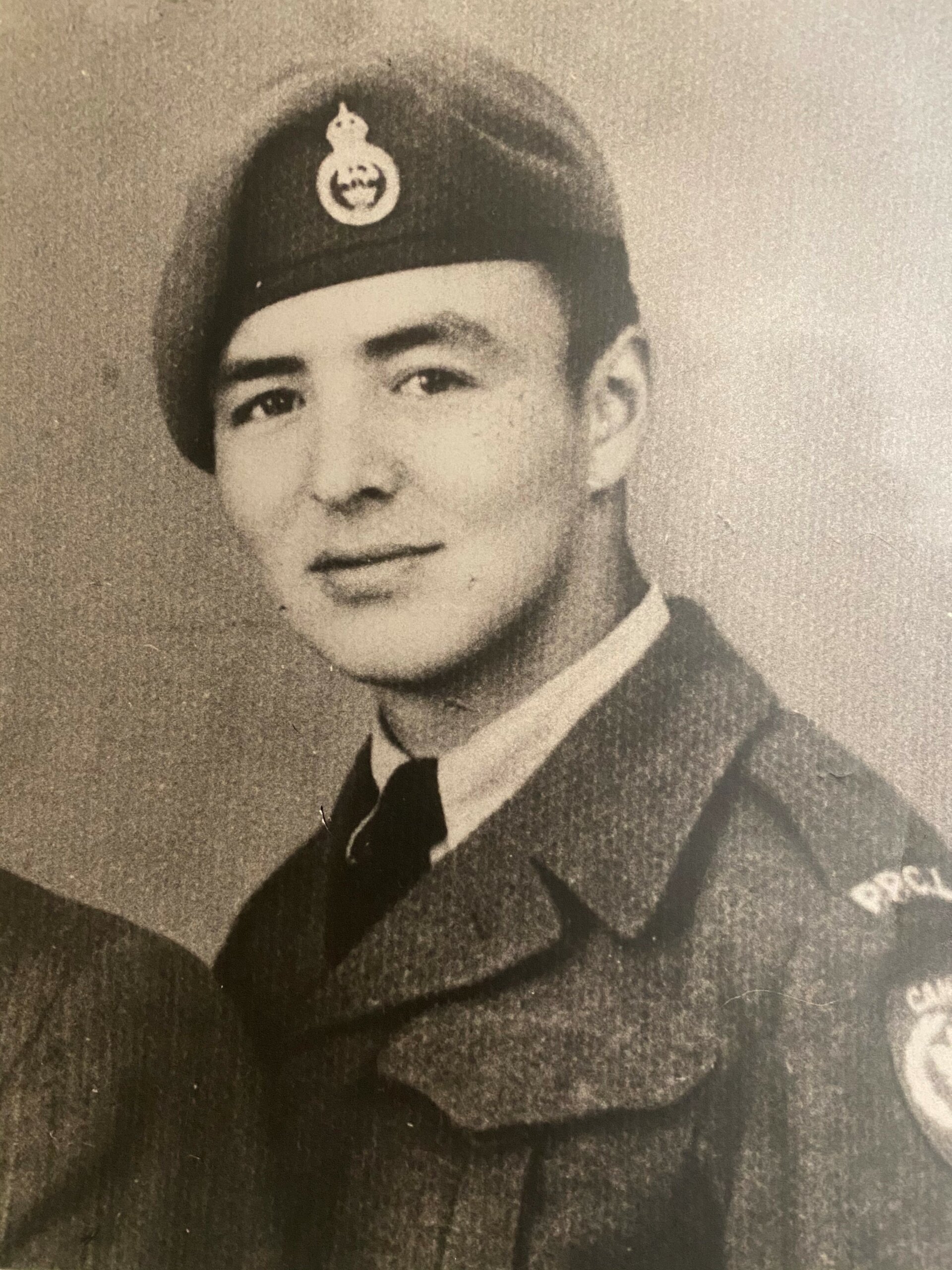 Leon Xavier Fontaine was born October 31, 1931 in Sagkeeng First Nation and attended the Fort Alexander residential school from 1939 to 1947. At 19, he enlisted and served in the Korean War, where he would be injured in action.

Upon honorable release from the Canadian Armed Forces, Leon completed training and apprenticeship as a plumber and pipefitter.

In his later years, Leon took a lead role in lobbying for the rights of First Nation Veterans who did not receive the same rights and benefits as other Veterans. He served as Vice-President of the Manitoba Aboriginal Veterans Association and as the Manitoba First Nation Representative in the annual Remembrance Day Services in Ottawa for 12 years.

Leon’s efforts and bravery have helped people from all corners of the Earth. We thank Leon for his service and his outstanding contributions to help First Nation peoples. 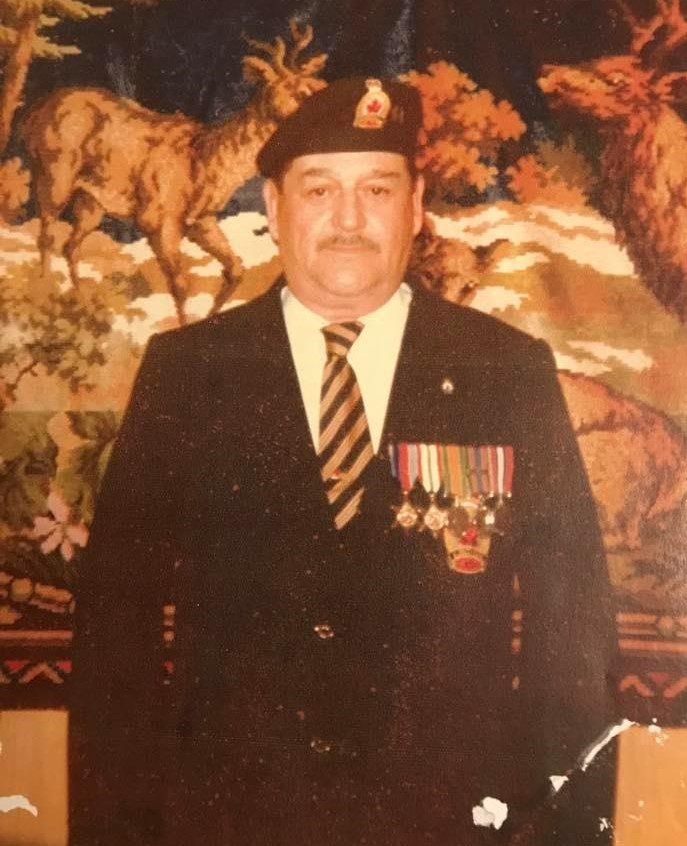 Felix Ambrose Fontaine was born in Sagkeeng First Nation and enlisted in June 1942. After training, he traveled to England then to North Africa and Italy, where he fought alongside British forces in September 1943.

Felix was wounded in action by an explosion and partially lost his hearing. After hospitalization he returned to the frontline where he remained until the war’s end. Felix won several medals: The Eastern Star, Italy Star, Canadian Volunteer Service Medal, 1939-1945 War Medal, and The King George Vl Medal.

Felix returned to Sagkeeng to take a lead role in changing the education system and was elected to Council. Felix shared many stories and teachings throughout his life with his home community about the sacrifices made by Veterans and the importance of Remembrance Day.

We thank Felix for his service and for being an inspiration to his Nation. 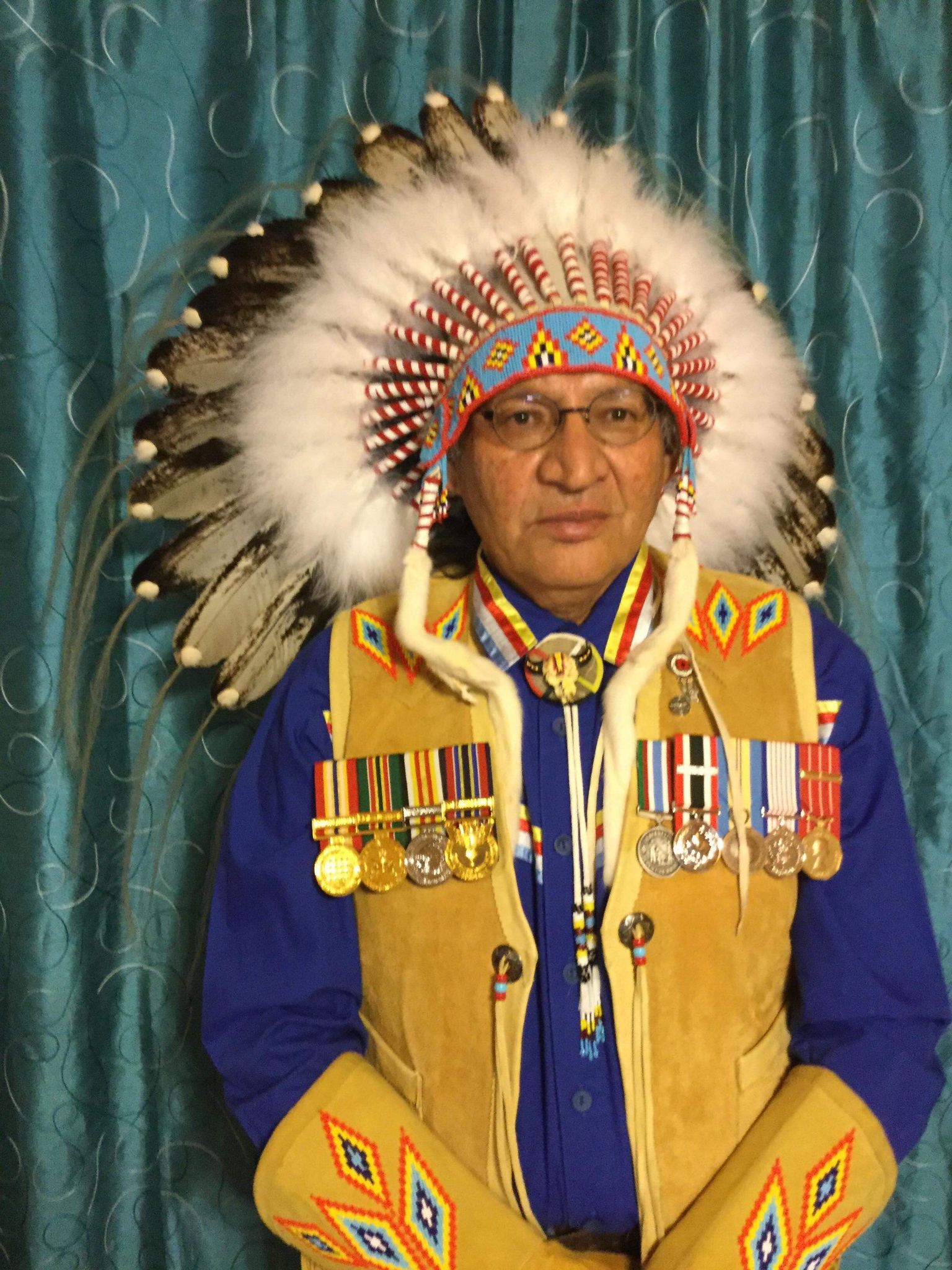 Sergeant Donald Vernon Houle (CD1), who grew up in Sandy Bay First Nation and served in the Canadian Armed Forces from 1971-1996.

Awarded with several medals for his valour, Donald Houle toured the Middle East then was stationed around the world and across Canada.

He is a member of the Canadian Aboriginal Veterans as well as the Kainai Headdress Society.

Donald now lives in Kainai First Nation, in what is now southern Alberta, on Blood Reserve 148 with his wife of 47 years, where he has worked as a cattle rancher since retiring from the military.

Miigwetch, Donald, for your contributions. 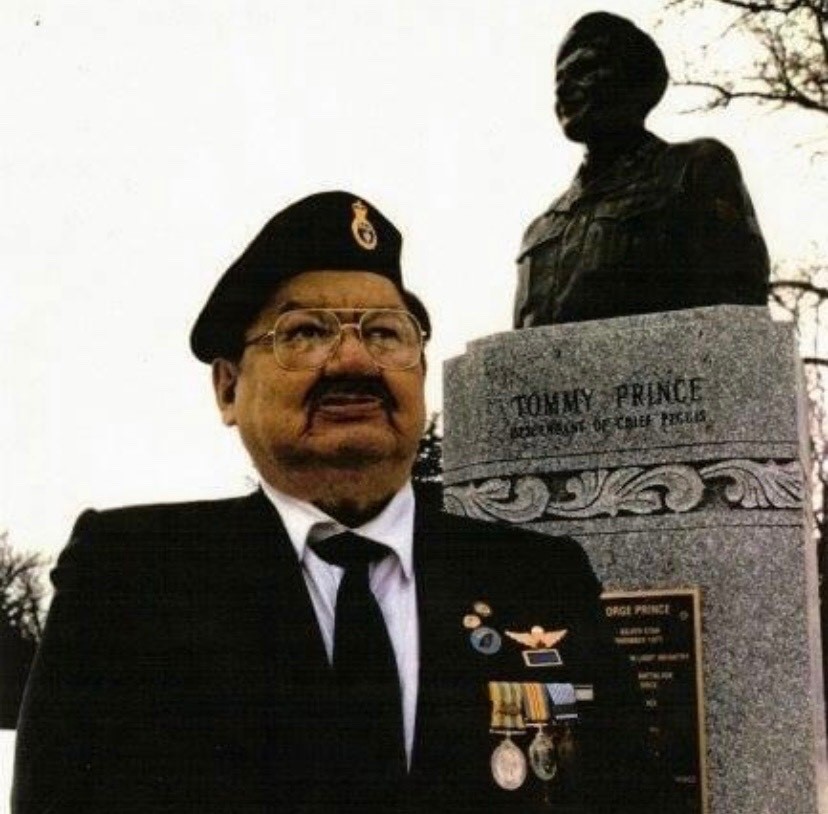 William George Mann (1930-1995) was born in Sagkeeng First Nation and was a direct descendent of Kakekipenace, who was a signatory to Treaty 1.

Mann served in Korea and the Far East, was twice wounded, and went missing in action one time during his service. As a result, he received the Oak Leaf for bravery, the Korea medal, UN Medal, the Volunteer Medal, and even the Coronation Medal when he was present in London, England as part of the Canadian contingent for the Coronation of Queen Elizabeth II in 1953.

A proud Anishinaabe Ogichidaa, Mann co-founded and was the first president of the Manitoba Aboriginal Veteran’s Association, as well as a member of the National Executive.

We thank William, for his service and sacrifice. 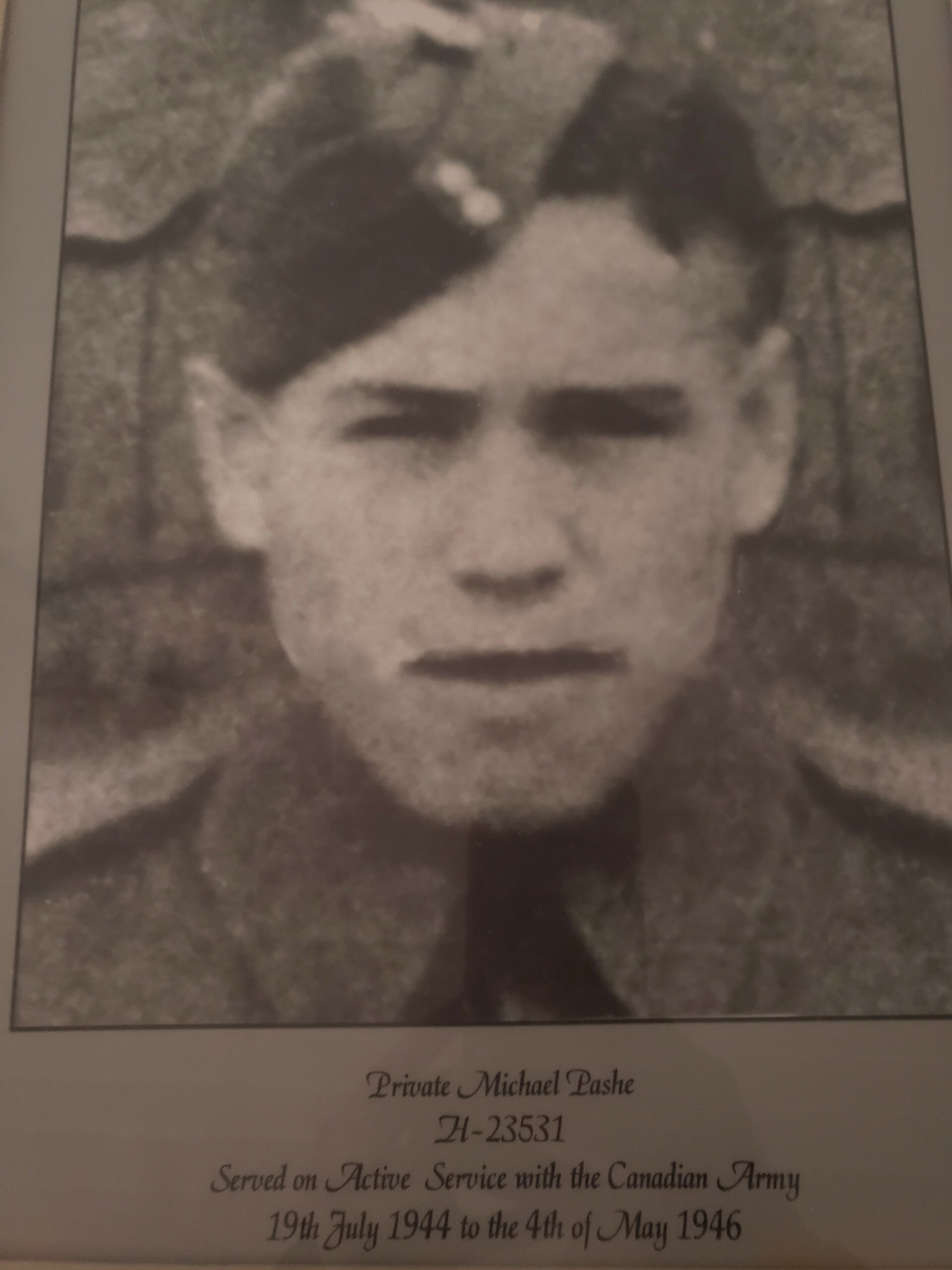 Michael Pashe was born in 1925 at the Old Sioux Village. Pashe attended Residential School, then served in the Canadian Army from 1944-46. He received the France and Germany Star Medal and the Canadian Volunteer Service Medal and Clasp for his service.

Michael worked construction for many years and also worked at the Winnipeg Airport. Michael was later elected as Chief of Dakota Tipi First Nation in the 1970s and was a powerful voice for his people.

A true role model for the Dakota Nations of Manitoba, Michael found happiness in his family.

We take this time to honour Michael for his bravery and leadership for our Dakota Relatives. 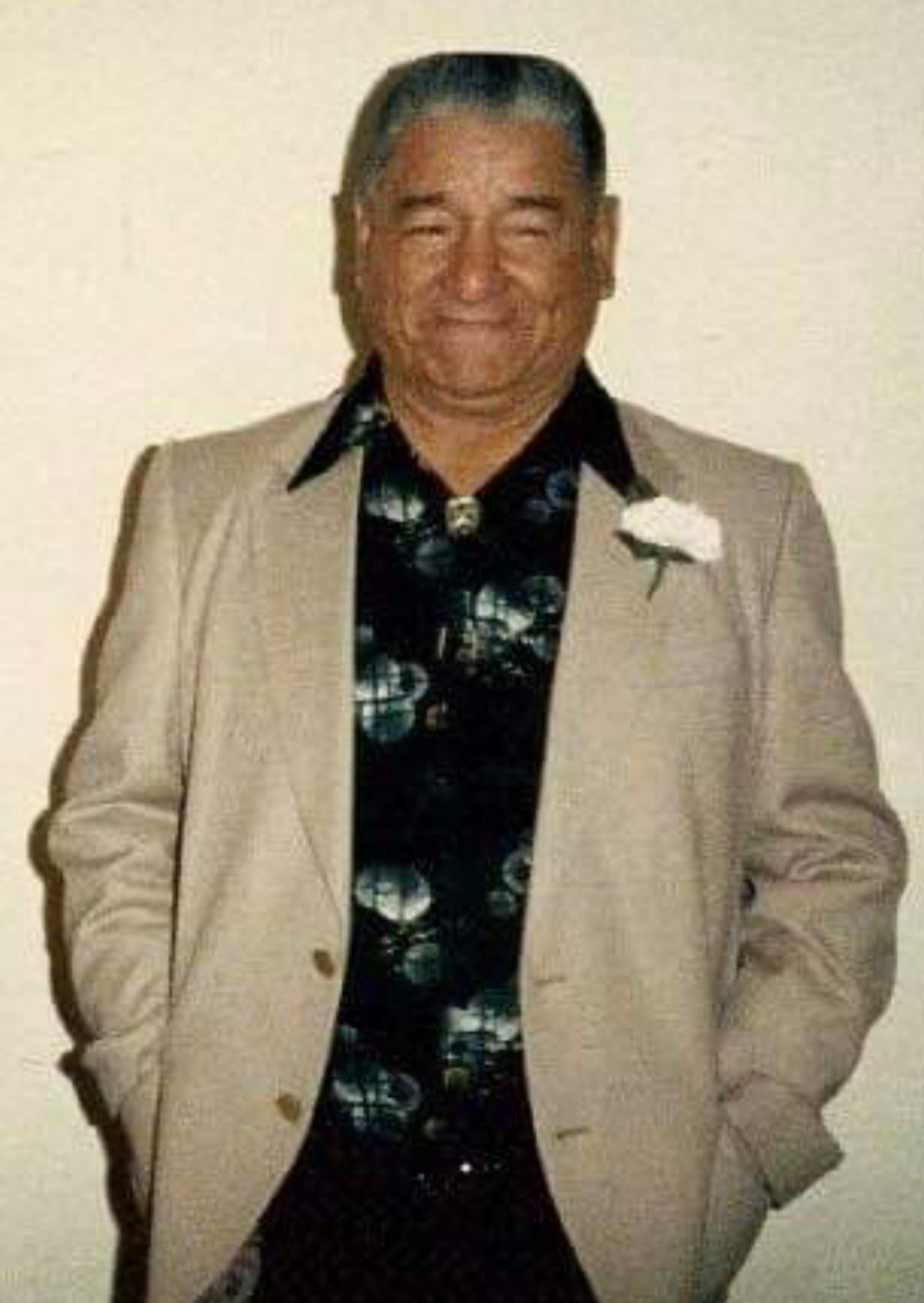 Upon return from WWII, Rufus was elected as Chief of Long Plain, and later became vice-president of the Manitoba Indian Brotherhood. Prince helped found the Dakota Ojibway Tribal Council and the Dakota Ojibway Police Force (the first Indigenous law enforcement agency in Canada) in 1977.

We commend Rufus for his valiant bravery, leadership, and all of his accomplishments. 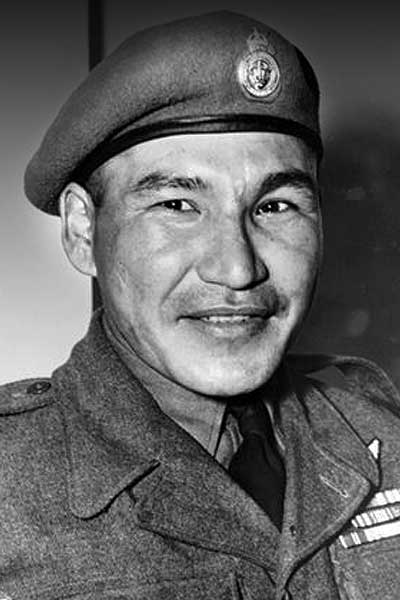 Thomas George Prince—a descendant of Chief Peguis—born in Petersfield, MB and from Brokenhead Ojibway Nation, was one of Canada’s most decorated First Nation war heroes!

Prince was known to carry a pair of moccasins that he would use to silently infiltrate enemy bases in the cover of night. He would even play tricks on soldiers as they slept; such as taking their boots or leaving a calling card while slipping away unnoticed. His unit became known as the Devil’s Brigade because the Nazis couldn’t believe that he was a real person. Speculation grew that he was an evil spirit or the devil!
Tommy Prince was decorated by King George VI at Buckingham Palace with both the Military Medal and the Silver Star with ribbon, on behalf of the US President.

Sergeant Prince’s contributions have not been forgotten, and we thank him for his bravery and outstanding achievements. 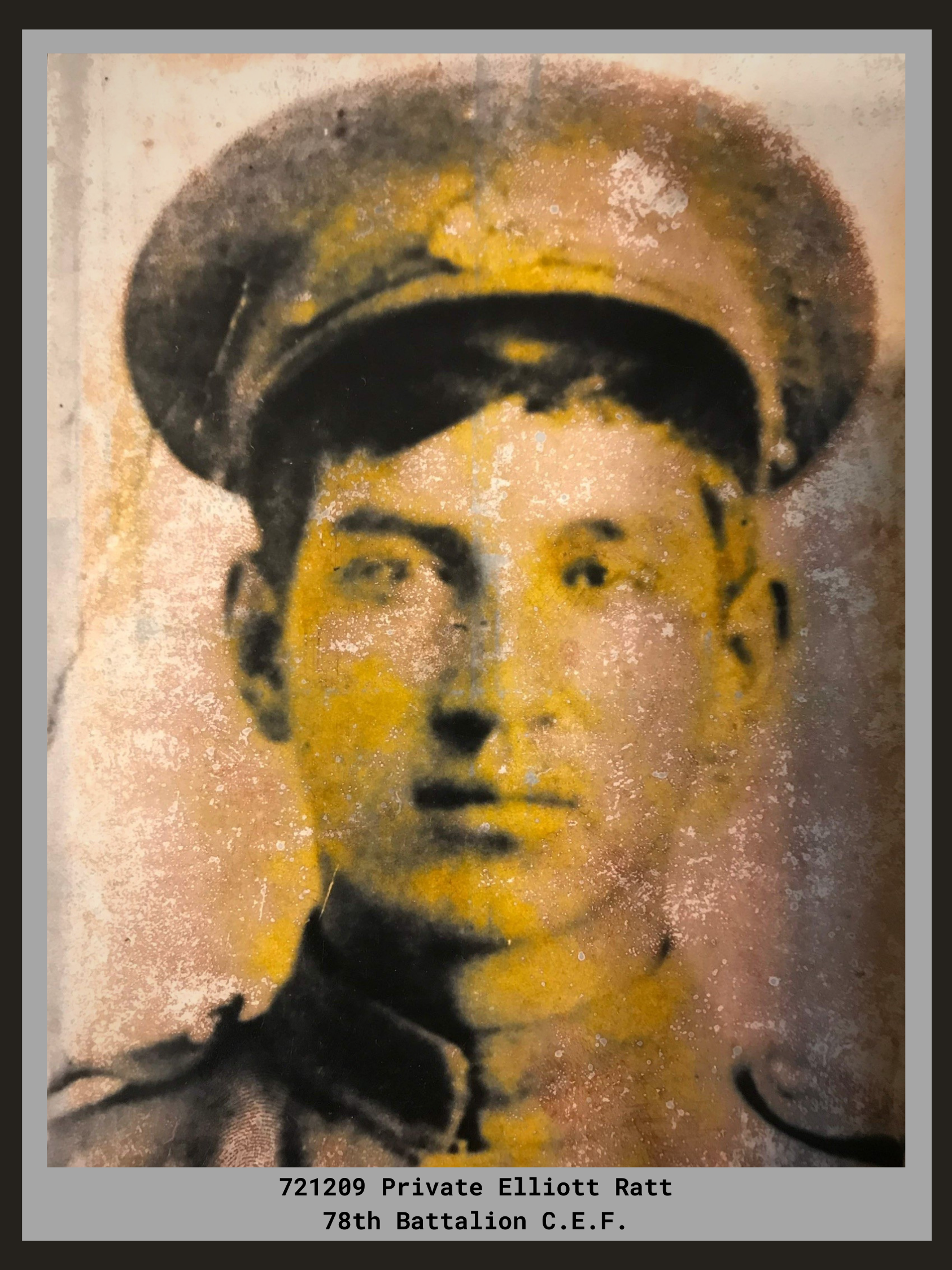 Elliott Ratt, from Peguis First Nation, served in World War I with the Canadian Army from 1916 to 1918. He was wounded in action by mustard gas and returned from the war to live in the Selkirk, Manitoba area. He had a small farm in Libau, MB, was able to receive a Veteran’s pension, and spent his time as a contractor for farmers in the Libau area helping to clear farmland.

In 1944, Elliott passed away due to complications from his exposure to mustard gas, leaving behind his wife, Mary Louise George, and 16 children. Elliot and Mary were both Peguis First Nation band members.

We thank Elliott for his strength, resilience, and his sacrifices.

“After all the abuse I saw and experienced in day school and in my community, I decided I could be my own man in the military.” 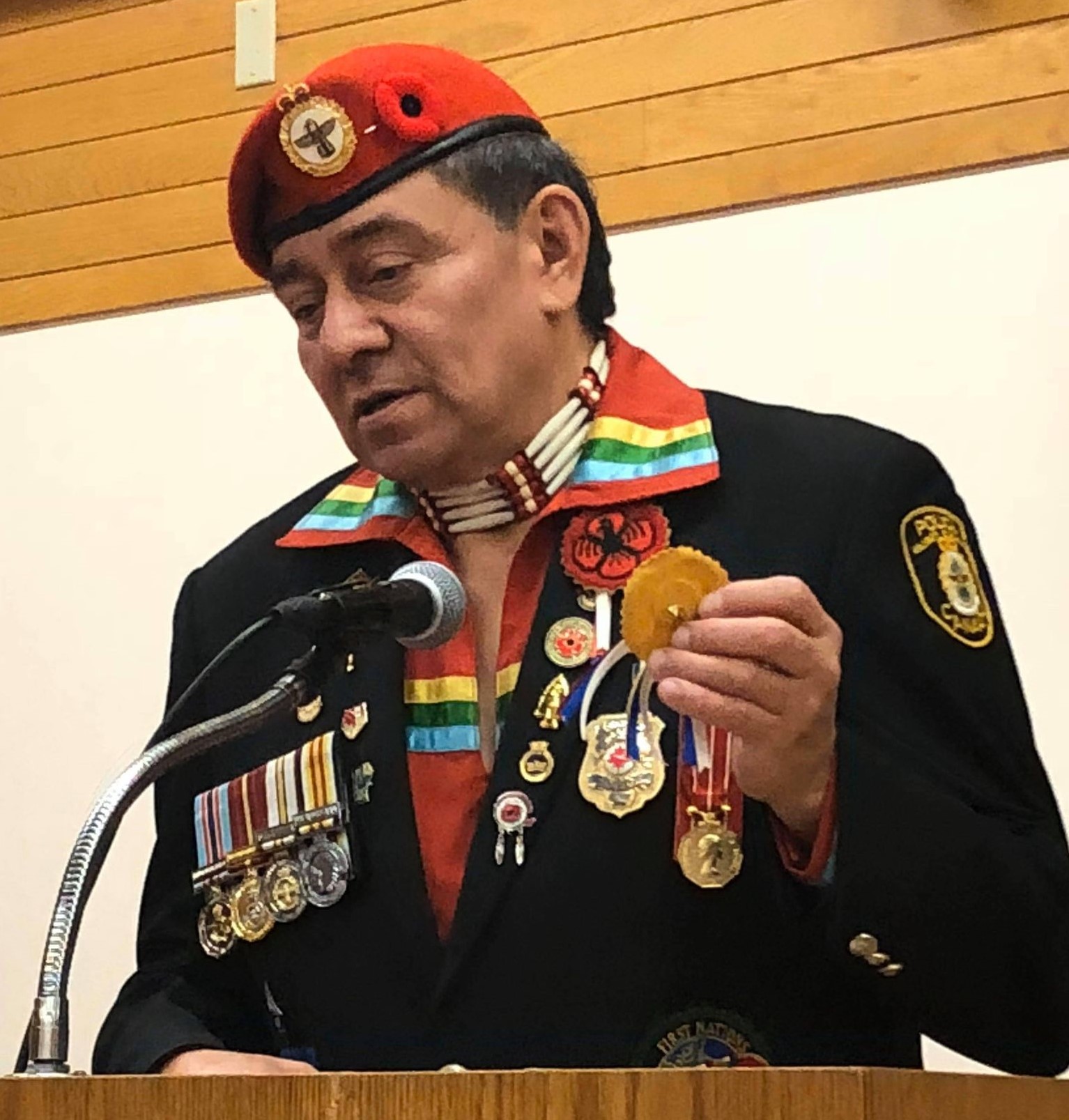 Corporal Melvin Swan, CD, was born in Ashern, Manitoba in 1959 and grew up in Lake Manitoba First Nation. Melvin served four years in the Princess Patricia’s Canadian Light Infantry and seven years in the military police.

“When I was 18, I needed to get away after day school and residential school, and I left for the military.”

Following his service, Swan won a Federal Court case against the military for discrimination during his time in uniform. “In some places more than others, I discovered that Aboriginal discrimination was alive and well. Behind my back and to my face, I was mocked, ridiculed, and scorned. Of course, they said they were “just joking,” but I knew they weren’t.”

When asked about what Indigenous Veteran’s Day means to him, Melvin said, “Well, I was there when it was created… What it means to me, is always remembering the Veterans that have passed, and honouring them in a good way.”

We thank Melvin Swan for his gallant contributions, his courage to stand up for Indigenous rights, and for carrying being our SCO Chiefs-in-Summit flag carrier. 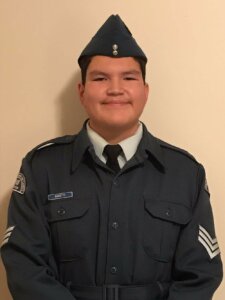 Meet Sergeant Jordan Bighetty from Sagkeeng First Nation, who is a 249 RCACS Cadet in Beauséjour, Manitoba.

Jordan became a Cadet to gain insight and knowledge of the military, but found it also taught him to appreciate the importance of discipline. He has made many friends by joining the Cadets. Though his family does not have an extensive military background, he looks up to his great-great uncle William Morrissou, who fought in World War I.

With his whole life ahead of him, Jordan says he has always had a “dream big” mindset and encourages others to do the same!

We believe in Jordan and wish him all the best in his endeavours. Miigwetch!